Crimson Apple have premiered the video for their new single, “Can’t Get Out of Bed”, exclusively via Refinery 29. “’Can’t Get Out Of Bed’ is an upbeat song with a surprisingly dark message”, Refinery 29 notes. “The video is an explosion of bright colors, as the four members of Crimson Apple struggle to escape the confines of an elegant house.” The song was written by Crimson Apple in collaboration with female writer/production team LYRE (Alina Smith & Elli Moore) and marks a new era for the band. “Can’t Get Out of Bed” is available now on all digital platforms. In support, the band is currently on the High School Nation (HSN) Tour. See below for a full list of dates. For more information on Crimson Apple, please visit: https://crimsonappleband.com/.

Hailing from Hawaii, Crimson Apple is Colby Benson (lead vocals/keyboards), Shelby Benson (guitar/vocals), Carthi Benson (bass/vocals) and Faith Benson (drums). Since the band’s inception in 2012, Crimson Apple have shared the stage with such venerated artists as All Time Low, One Republic, Switchfoot, The Green, Will Champlain, and Hawaiian music legends, HAPA. The group’s 2015 self-released debut album, Hello, garnered commercial success in Hawaii and across the internet, earning spins on iHeartMedia and Star 101.9. The year of its debut, the sisters also earned nominations for Alternative Album of the Year, Most Promising Artist of the Year, and Group of the Year at the Na Hoku Hanohano Awards–Hawaii’s equivalent of the Grammy Awards.

Since relocating to Los Angeles, Crimson Apple have performed in numerous venues in California, Nevada, Colorado and Pennsylvania, signed a management and recording deal with Amuse Group (Perfume, BABYMETAL, ONE OK ROCK) and landed a spot on this year’s High School Nation Tour. For their next release, the Benson sisters are collaborating with producers from the US, Japan and UK, bouncing ideas back and forth and being open to fresh perspectives. With undeniable chemistry on and off stage, and a musical bond only sisters could share, Crimson Apple seem to have all the makings to be pop music’s next big thing. 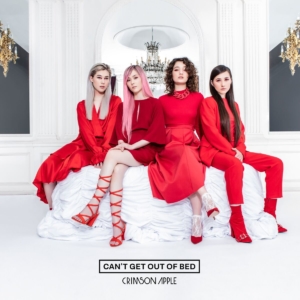 The U.S. survived the 1968 pandemic without shutting