Donald Trump has agreed not to escalate his trade war with China, but many other countries have also been affected by the US president’s America First trade policy.

From Spanish olives to Canadian steel, no corner of the world has been untouched by US trade tariffs – a tax on foreign products – since President Trump entered the White House.

Along the way, he has rewritten the rule book for how the US goes about the process of protecting its domestic trade.

How are tariffs usually made?

A tariff is a tax on a foreign product designed to protect domestic producers in an effort to boost local economies.

But under international trade laws, the US can’t just implement them willy-nilly, they need to provide a reason why the tariff is necessary and investigate it fully.

Until recently, the vast majority of US tariffs were justified as countervailing and antidumping duties.

Not all investigations lead to tariffs – at some point during the process, the US may decide they don’t have grounds to be implemented. But many do.

Under President Trump, the Department of Commerce has begun 122 investigations into anti-dumping/countervailing duties.

These tariffs have targeted all corners of the globe, reaching 31 countries total and affecting some $12bn (£9.4bn) in imports.

China has borne the brunt of US scrutiny, with about 40% of countervailing/antidumping investigations targeting Chinese products ranging from aluminium alloy to rubber bands to silk ribbons.

Other countries have found themselves in Mr Trump’s crosshairs as well. 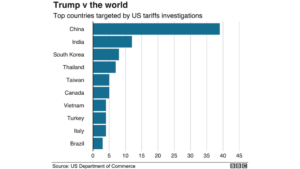 After receiving a complaint from California farmers, the US levied tariffs on Spanish olives, arguing that EU payments to olive farmers under the Common Agricultural Policy (CAP) constituted an unfair trading subsidy.

Most of the world’s olives come from the Mediterranean, but in a meeting with Spanish Prime Minister Mariano Rajoy last September, Mr Trump signalled a willingness to protect American farmers.

“It must be fair,” he said, describing the trade relationship between the US and Spain. “And it must be reciprocal.”

That decision affects $68m of Spanish exports to the US and has raised the eyebrows of the EU.

As with Spain, the US has shown no qualms about going after traditional allies such as Canada.

The single largest investigation since Mr Trump took office focused on Canadian aircraft company Bombardier, and affected $5bn of Canadian exports to the US. 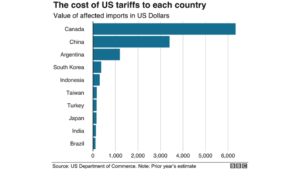 Eight months later, the US International Trade Commission found Canada’s aircraft industry did not harm US businesses, and the 300% duties against the Bombardier C-Series were cancelled.

Although most tariff investigations targeted mundane industrial products, like carbon and steel wire or mechanical tubing, many could have a real impact on the US consumer.

A far-reaching investigation into citric acid touched three continents, with tariffs issued for Belgium, Columbia and Thailand. The chemical compound mimics the sour tang of lemons and is used in a large amount of common candies and drinks, from Sour Patch Kids to 7Up. 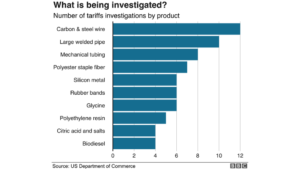 Another massive investigation into biodiesel from Argentina and Indonesia led to tariffs being issued on $1.5bn of imports. The fuel, which is made from plants, is used in diesel cars and lorries, as well as airplanes and trains. The market has huge growth potential in the US, which is a major grower of corn and soybeans, and the tariffs could ostensibly help grow the industry.

Similar tariffs were introduced by the EU in 2012.

Tariffs are nothing new.

Over the last decade, the US government collected approximately $283bn in customs duties. 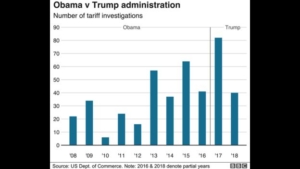 But President Trump has led a charge for the US to get even more aggressive.

Last year, the Commerce Department began 82 probes – nearly double the 56 that Barack Obama’s administration started in 2013, its most active year,

And in a significant change in protocol, officials are no longer waiting for companies to petition for help.

It was the first time the department acted on its own regarding antidumping or countervailing duties, without a complaint from industry, in decades, and a sign of a shift in the department’s policy under the new administration.

“[President Trump] isn’t willing to wait for companies to come forward. He wants to do it himself, he wants to have the government decide,” says Chad Bown, a senior fellow at the Peterson Institute for International Economics.

“So he starts self-initiating cases but also… he says we’re going to start using other laws where there are much more presidential discretion.”

But by far the biggest shift in US trade policy has been Trump’s willingness to buck with tradition if it will let him get tariffs through faster.

Rather than go through lengthy antidumping/countervailing investigations – and risk his tariffs being overturned – Trump has introduced hundreds of billions of tariffs under little-used aspects of trade law.

Citing national security concerns, Trump has taken sweeping actions to protect steel and aluminium producers and embarked on a trade war with China, which he accuses of intellectual property theft.

“You now see a lot more import protection that you would typically see arise,” Bown says.

Trump’s willingness to think outside the box on trade has made him a thorn in the side of countries like China who can’t predict his next move.

They have also led to retaliatory tariffs on hundreds billions of dollars of US goods.

But after a summer of hostile trade negotiations with Canada and Mexico, and an escalating trade war with China, things seem to be calming down.

Last week, he signed United States-Mexico-Canada Agreement to replace the North American Free Trade Agreement (Nafta). The agreement signalled the end of a long and tense saga between the three neighbours.

He also seems keen to end his trade war with China.

But if Trump’s past actions have taught anyone anything, it is that the only thing predictable about his trade policy is its unpredictability.

PHOENIX – Gov. Ducey’s Executive Order has laid out a