WASHINGTON — The nation’s capital bids its final farewell to the late president, George H.W. Bush, in a service of prayer and praise that is drawing together world envoys, Americans of high office and a guy from Maine who used to fix things in Bush’s house on the water.

The ceremony Wednesday at Washington National Cathedral, the nexus of state funerals, will cap three days of remembrance by dignitaries and ordinary citizens as they honored the Republican president who oversaw the post-Cold War transition and led a successful Gulf War, only to lose re-election in a generational shift to Democrat Bill Clinton in 1992.

Here is the latest information as the nation bids farewell to the 41st President of the United States (all times are ET):

President George H.W. Bush heads to the Washington National Cathedral amid tight security as the town prepares for the state funeral.

The 41st president left the Capitol for the last time, accompanied by his family. As they arrived at the steps of the cathedral, his casket was taken out and brought into the building as a crowd of onlookers gathered across the lawn from the Capitol.

Family, friends, congressional leaders and others gathered with military brass on the steps of the Capitol for the send-off Wednesday as cannons echoed a salute and a military band played “Hail to the Chief.”

Bush’s flag-draped coffin was carried to a waiting hearse for the procession to the cathedral. His son former President George W. Bush put his hand over his heart at the plaza.

H.W.’s children and their spouses entered behind the casket with George W. Bush right behind his father.

When George W. Bush gave a speech in the Washington National Cathedral after Sept. 11, 2001, his father was there to comfort him. 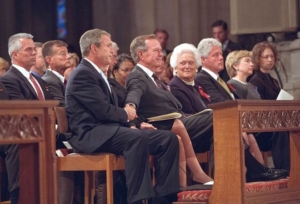 The family greeted the aisle where past and present presidents were sitting. George W. Bush even slipped into the aisle to sneak former first lady Michelle Obama a piece of candy, which he has been known to do in the past.

As the casket was placed at the front of the room, the choir sang melodious tunes and the Bush children took their seats.

Then two of H.W.’s granddaughters, Lauren Bush Lauren and Ashley Walker Bush, walked to the front of the room and read scripture to start the services. Up next was Jon Meacham, presidential historian and presidential biographer, who shared memories of H.W. Bush’s time as the leader of the country.

Meacham told stories of H.W.’s time serving in the Navy and of his personal demeanor.

“If you were down he would rush to lift you up … ,” Meacham said.