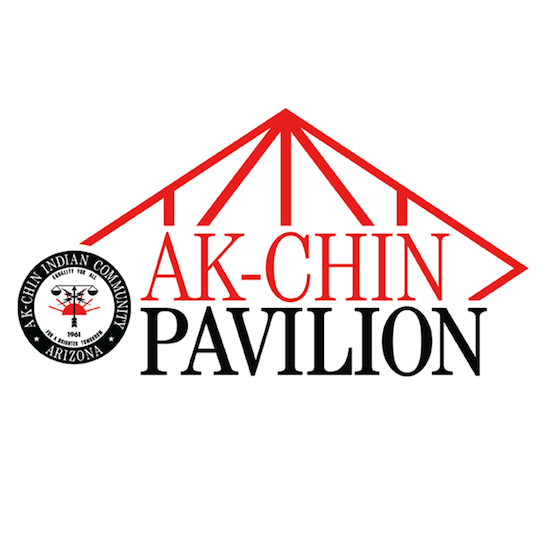 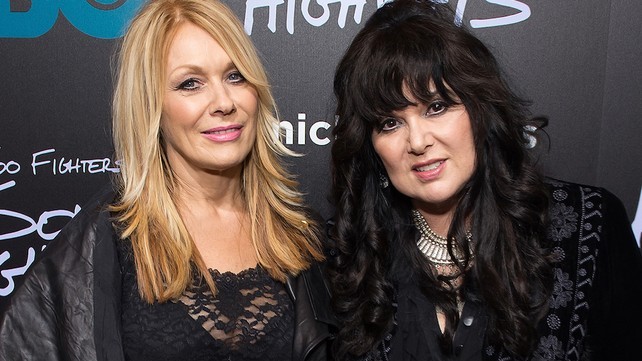 When women stand up for themselves, show up, and speak out, change occurs time and time again, whether in politics, culture, entertainment, or music. There might be no women stronger–and louder–than the legendary ladies of HEART. Formed by sistersANN and NANCY WILSON, the Rock and Roll Hall of Fame®-inducted group not only pioneered the female-fronted rock band, for all intents and purposes, but they also soundtracked four decades and counting. Throughout this time, the band sold over 35 million records, garnered four GRAMMY® Award nominations, landed ten Top 10 albums, received a star on the Hollywood Walk of Fame, and achieved “the longest span of top-10 albums on the Billboard charts by a female-led band.”

ANN and NANCY were both born in California and raised in Washington state and even early on, it was obvious that music would be their destiny. By ten-years-old, NANCY positioned herself as a future guitar virtuoso as ANN developed a bold, bluesy alto voice informed by an intense passion for the likes of Led Zeppelin. They formally become HEART in 1974 and transformed into a Pacific Northwest favorite in the process.

By 1975, they had recorded their seminal debut Dreamboat Annie. Bordering rock and heavy metal fastened with folk songcraft, the platinum breakthrough spent 100 weeks on the charts and spawned a string of smashes such as “Magic Man,” “Dreamboat Annie (Fantasy Child),” and “Crazy On You.” Signature hit “Barracuda” bared its teeth on the triple-platinum 1977 epic Little Queen. As the musicians sold out shows worldwide and continued their multiplatinum reign on Magazine, Dog & Butterfly, and Greatest Hits Live, they recorded the definitive self-titled Heart in 1985–ten years removed from Dreamboat Annie. Vaulting to superstar status, Heart bowed at #1 on the Billboard Top 200, went quintuple-platinum, earned a GRAMMY® Award nomination, and yielded “If Looks Could Kill,” “What About Love,” “Never,” and “These Dreams,” which captured the #1 spot on the Billboard Hot 100, which features NANCY on lead vocals.

Maintaining this unparalleled momentum, Bad Animals followed in 1987, featuring the #1 hit “Alone,” and reaching triple-platinum status in addition to notching a pair of GRAMMY® Award nods. The double-platinum GRAMMY®-nominated Brigade ignited the nineties and served up the gold-certified “All I Wanna Do Is Make Love To You.” In 1993, Desire Walks On illuminated their shadow over the grunge explosion with a guest appearance from none other than Alice In Chains frontman Layne Staley. 1995’s The Road Home represented a full circle moment as Zeppelin’s John Paul Jones helmed the gold-selling live disc. In between a handful of intermittent breaks, Greatest Hits 1985-2000 [2000] and Essential Heart [2002] would both also be minted platinum over the next decade.

The aughts represented another watershed era for HEART. They revved back up to the Top 10 of the Billboard Top 200 with Red Velvet Car in 2010 as Fanatic soared to the Top 25 two years later. 2012 saw their first-ever memoir Kicking & Dreaming: A Story of Heart, Soul and Rock & Soul arrive as a New York Timesbestseller. Meanwhile, they brought the house down at that year’s Kennedy Center Honors, moving Robert Plant to tears during an historic rendition of “Stairway to Heaven.” HEART commemorated the 40th Anniversary of Dreamboat Annie with a 2016 festival and hosted a full celebration in the UK at the hallowed Royal Albert Hall.   2016 saw the release of BEAUTIFUL BROKEN, HEART’s sixteenth album and their first on Concord Records, the album saw the group “cherry picking” songs from their catalog and rerecording and rethinking them.  Following the album’s release, HEART launched a summer headlining run with Joan Jett & the Blackhearts and Cheap Trick.

A new era has commenced in 2019. ANN and NANCY welcome a bevy of female powerhouses to join them on their biggest package tour to date–the “Love Alive” Summer Tour. HEART headlines a bill that includes Joan Jett & The Blackhearts, Sheryl Crow, Brandi Carlile, Elle King, and Lucie Silvas and rolls through major markets everywhere.

The group’s impact resounds far beyond the stage. ANN lent her voice to classic motion picture themes, spanning “Almost Paradise” from “Footloose,” “Best Man in the World” from “The Golden Child,” and “Surrender To Me” from “Tequila Sunrise.”  In 2018, ANNreleased the critically acclaimed IMMORTAL album.  It features 10 musically diverse tracks that pay tribute to some of ANN’s influences and friends who’ve recently passed and whose music poignantly lives on.  She also performed solo dates and hit the road with Jeff Beck and Paul Rodgers for the “Stars Align Tour.

NANCY has also built a successful career as a film composer.  Her composing credits include scores for the Cameron Crowe films: “Say Anything” (1989), “Almost Famous” (2000), “Vanilla Sky” (2001), “Elizabethtown” (2005), and “Jerry Maguire”(1995) [main theme].  Most recently, in 2017, NANCY teamed up with former Prince’s New Power Generation band member and R&B singer Liv Warfield to form the soulful, rock super group, Roadcase Royale.  They released First Things First in September and the group went on to open for Bob Seger on his 2017 farewell tour.

Additionally, ANN and NANCY penned a 2015 children’s book, Dog & Butterfly, named after their smash of the same name. Giving back whenever possible, they stand out as committed philanthropists supporting nearly one-hundred charitable causes.

HEART’s influence can be palpably felt everywhere from rock and heavy metal to hip-hop and pop. Eminem, Lil Wayne, G-Eazy, Nas, and more have famously sampled the band’s catalog, while Céline Dion, Fergie, Halestorm and many others have covered them in the studio and on stage. As a result, their music resonates in nearly every corner of pop culture.

As time goes on, the sound, spirit, and soul of HEART only gets louder with each passing year. In the end, they ultimately opened doors for countless musicians to follow, and their place in rock’s pantheon as pioneers stands solidified forever. 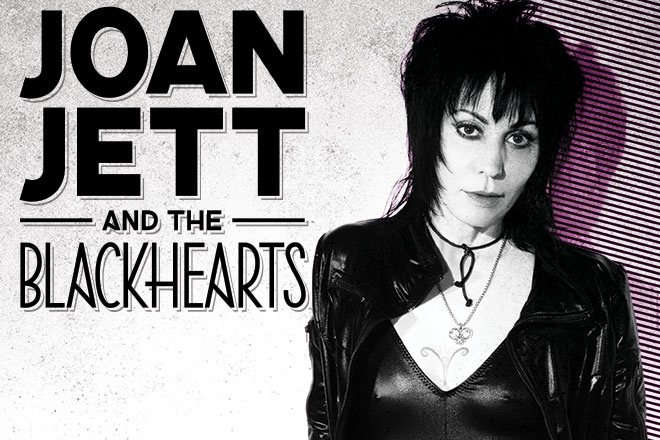 Joan Jett is an originator, an innovator, and a visionary. As the leader of the hard- rocking Blackhearts, with whom she has become a Rock and Roll Hall of Fame inductee, she’s had eight platinum and gold albums and nine Top 40 singles, including the classics “Bad Reputation,” “I Love Rock ‘N’ Roll,” “I Hate Myself For Loving You,” and “Crimson and Clover.” Her independent record label, Blackheart Records, was founded in 1980 after she was rejected by no less than 23 labels. Blackheart is one of the longest running indie labels and continues to give voice to new bands. Jett has acted in movies and television, including 1987’s Light Of Day, and in a Tony-nominated Broadway musical, The Rocky Horror Show. She has appeared on such acclaimed television shows as Oprah (the last season) and Law and Order.

As a producer, she has overseen albums by Bikini Kill, Circus Lupus, as well as the Germs’ LA punk masterpiece, GI.

Her music has become a permanent force in mainstream culture. A version of “I Hate Myself for Loving You” was reworked for NBC’s Sunday Night Football theme song, Waiting All Day for Sunday Night”, and was performed for 9 seasons by the likes of Pink, Faith Hill and Carrie Underwood. Her music is heard in countless films and TV shows including Easy – A, Kick Ass, The Runaways, Shrek, Baby Mama, and many more.

Since co-founding the Runaways, the pioneering all-girl punk quintet, at age 15, Jett’s determination and drive have kept her in the public eye. Jett was able to see her story told in The Runaways, the film based on (lead singer of The Runaways) Cherie Currie’s book Neon Angel starring Kristen Stewart as Jett, and her fellow A-lister Dakota Fanning as Currie. Jett was close to the project: She served as an executive producer. Jett and the Blackhearts released their latest record, ‘Unvarnished,’ in 2013 and continue touring the globe to throngs of adoring fans.

Joan Jett has spent her lifetime breaking barriers and challenging expectations – this is, after all, a woman who is both a spokesperson for PETA and a devoted supporter of the US Military. She’s fought hard for all of her historic accomplishments, yet she remains humble and appreciative.

“I’ve had a blessed career,” she says. “I consider myself so lucky to have been able to do things my own way.”