Rage Against The Machine at Gila River Arena 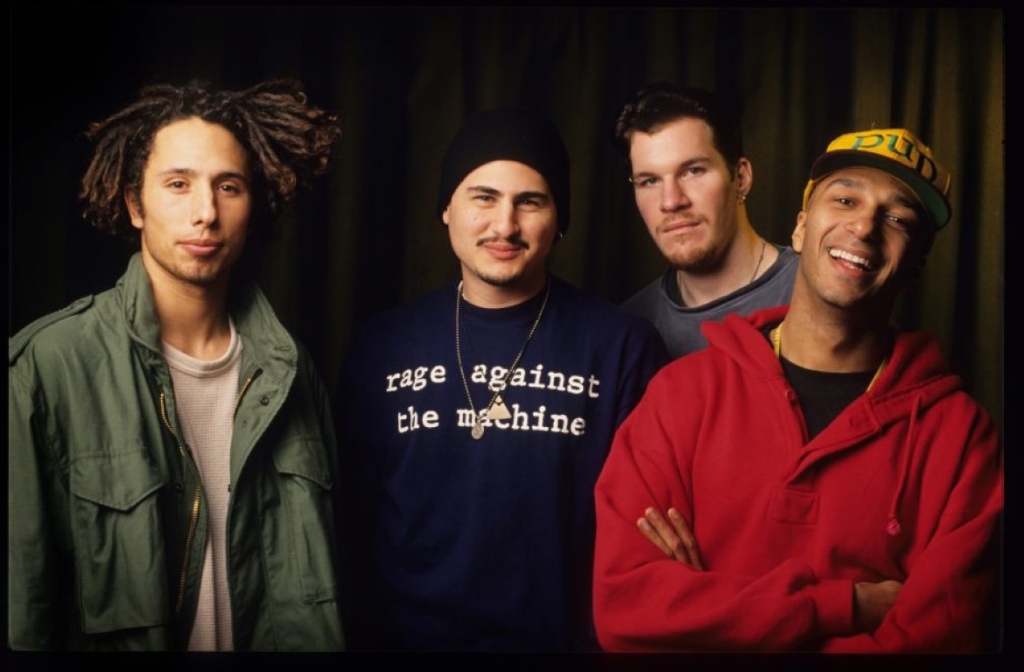 Rage Against the Machine earned acclaim from disenfranchised fans (and not insignificant derision from critics) for their bombastic, fiercely polemical music, which brewed sloganeering leftist rants against corporate America, cultural imperialism, and government oppression into a Molotov cocktail of punk, hip-hop, and thrash. Rage formed in Los Angeles in the early ’90s out of the wreckage of a number of local groups: vocalist Zack de la Rocha (the son of Chicano political artist Robert de la Rocha) emerged from the bands Headstance, Farside, and Inside Out; guitarist Tom Morello (the nephew of Jomo Kenyatta, the first Kenyan president) originated in Lock Up; and drummer Brad Wilk played with future Pearl Jam frontman Eddie Vedder. Rounded out by bassist Tim Bob (aka Tim C., born Tim Commerford), a childhood friend of de la Rocha‘s, Rage debuted in 1992 with a self-released, self-titled 12-song cassette featuring the song “Bullet in the Head,” which became a hit when reissued as a single later in the year.

The tape won the band a deal with Epic, and their leap to the majors did not go unnoticed by detractors, who questioned the revolutionary integrity of Rage Against the Machine’s decision to align itself with the label’s parent company, media behemoth Sony. Undeterred, the quartet emerged in late 1992 with their official debut, Rage Against the Machine, which scored the hits “Killing in the Name” and “Bombtrack.” After touring with Lollapalooza and declaring their support of groups like FAIR (Fairness and Accuracy in Reporting), Rock for Choice, and Refuse & Resist, Rage spent a reportedly tumultuous four years working on their follow-up; despite rumors of a breakup, they returned in 1996 with Evil Empire, which entered the U.S. album charts at number one and scored a hit single with “Bulls on Parade.” During 1997, the group joined forces with hip-hop supergroup the Wu-Tang Clan for a summer tour and remained active in support of various leftist political causes, including a controversial 1999 benefit concert for death-row inmate Mumia Abu-Jamal. The Battle of Los Angeles followed later in 1999, also debuting at number one and going double platinum by the following summer. In early 2000, de la Rocha announced plans for a solo project, and the band performed an incendiary show outside the Democratic National Convention in August. The following month, bassist Commerford was arrested for disorderly conduct at MTV’s Video Music Awards following his bizarre disruption of a Limp Bizkit acceptance speech, in which he climbed to the top of a 15-foot set piece and rocked back and forth.

Plans for a live album were announced shortly thereafter, but in October, de la Rocha abruptly announced his departure from the band, citing breakdowns in communication and group decision-making. Surprised but not angry, the remainder of Rage announced plans to continue with a new vocalist, while de la Rocha refocused on his solo album, which was slated to include collaborations with acclaimed hip-hop artists including DJ Shadow and El-P of Company Flow. December 2000 saw the release of de la Rocha‘s final studio effort with the band, the Rick Rubin-produced Renegades; it featured nearly a dozen covers of hip-hop, rock, and punk artists like EPMD, Bruce Springsteen, Devo, the Rolling Stones, the MC5, and more. By 2001, Morello, Wilk, and Commerford had formed Audioslave with former Soundgarden frontman Chris Cornell, and the group released an eponymous album by the end of 2002. With a de la Rocha solo album still not announced, Epic finally released the long-promised concert album Live at the Grand Olympic Auditorium on CD and DVD in time for Christmas 2003.

Over the next few years, rumors of a Rage Against the Machine reunion always swirled but never came to fruition. Two Audioslave albums followed in 2005 and 2006 before the group split, then the next year Morello began releasing protest folk-punk as the Nightwatchman. That year also brought the long-anticipated Rage Against the Machine reunion. First, the band played the closing day of 2007’s Coachella festival, then in 2008 several other gigs followed, usually coinciding with major festivals in Europe and the U.S. No new studio work from Rage Against the Machine materialized but de la Rocha collaborated with former Mars Volta drummer Jon Theodore in a group called One Day as a Lion, who released an EP that year. The next burst of Rage activity came in 2009 when there was an Internet campaign to get “Killing in the Name” to the top of the U.K. charts, all in the hopes of thwarting an X Factor winner from taking the pole position. The viral campaign worked and Rage played a free celebratory concert at Finsbury Park in the summer of 2010.

Despite all these gigs — including a summer 2011 appearance at L.A. Rising, a festival the band arranged — and word of a new album, no recordings appeared. In 2013, their debut album received a deluxe reissue and then the 2010 Finsbury Park gig saw a CD/DVD release in 2015. The next year, Morello, Wilk, and Commerford joined forces with Public Enemy‘s Chuck D and Cypress Hill‘s B Real to form the supergroup Prophets of Rage. ~ Jason Ankeny, Rovi 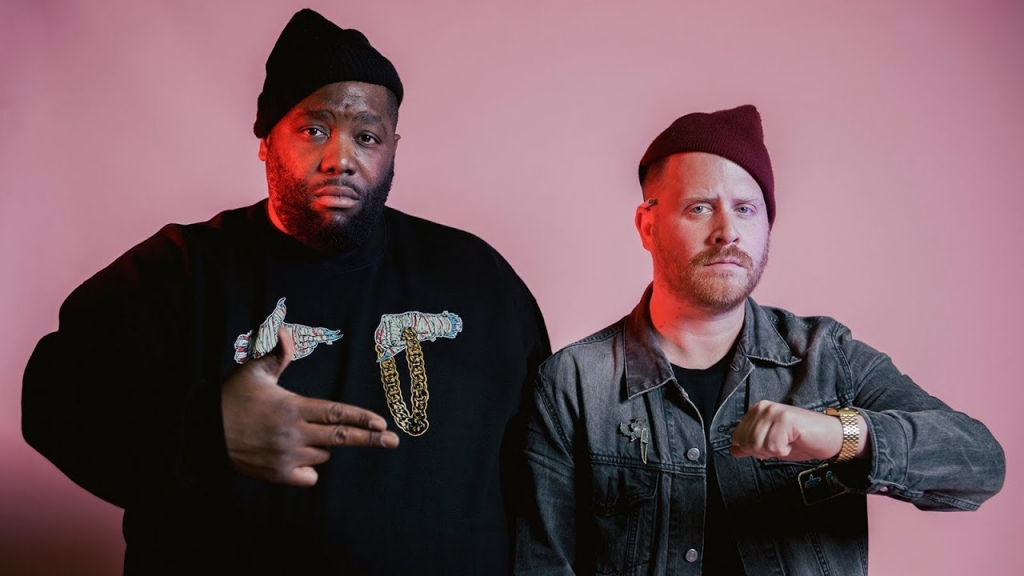 What started as a one-off project that quickly evolved into a Grammy-nominated hip-hop super duo, Run the Jewels features the talents of Brooklyn rapper/producer El-P and Atlanta emcee Killer Mike. Atop hard-hitting beats and ominous production, the pair trade aggressive and often wryly comical rhymes, touching upon social issues, life and death, and a heavy dose of chest-thumping bragging. Following their critically acclaimed, underground hit Run the Jewels (2013), they expanded their reach with 2014 crossover breakthrough Run the Jewels 2, which graduated the pair from genre secret to genuine chart presence. Their U.S. R&B/Hip-Hop number one Run the Jewels 3 landed in 2016, helping RTJ become an in-demand headliner for both rap and alternative rock fans.

Formed after El-P produced Killer Mike‘s 2012 album, R.A.P. Music, the duo released their debut offering Run the Jewels (Fool’s Gold). Critically popular and with a sizable underground fan base to boot, Run the Jewels quickly garnered national attention. Their sophomore effort, 2014’s Run the Jewels 2, marked the pair’s first appearance on the Billboard 200. RTJ2 featured appearances by Boots, Travis Barker, Gangsta Boo, and Rage Against the Machine‘s Zack de la Rocha, who lent his distinctive vocals to the fiery single, “Close Your Eyes (And Count to Fuck).” A crowd-funded remix version of the album — with all the music replaced by samples of meowing cats — was released in 2015 as Meow the Jewels. It featured guest appearances from Portishead‘s Geoff Barrow, Dan the Automator, and Internet feline sensation Lil Bub. The group ended the year with the single “Rubble Kings (Dynamite on the Street),” released by the Adult Swim label.

In 2016, the duo announced RTJ3, which was set for release in early 2017. However, on Christmas Eve 2016, they unexpectedly uploaded the album as another free download. Featuring appearances by Joi, Trina, Boots, Danny Brown, Tunde Adebimpe, Kamasi Washington, and the return of Zack de la Rocha, RTJ3 debuted in the Billboard Top 20 and topped both the Rap and R&B/Hip-Hop charts. Promoting the effort over the coming years, they headlined multiple festival stages across the globe and joined pop star Lorde on her 2018 Melodrama World Tour. That same year, a collaboration with Danger Mouse and Big Boi, “Chase Me,” was nominated for a Grammy Award for Best Rap Song. ~ David Jeffries & Neil Z. Yeung, Rovi