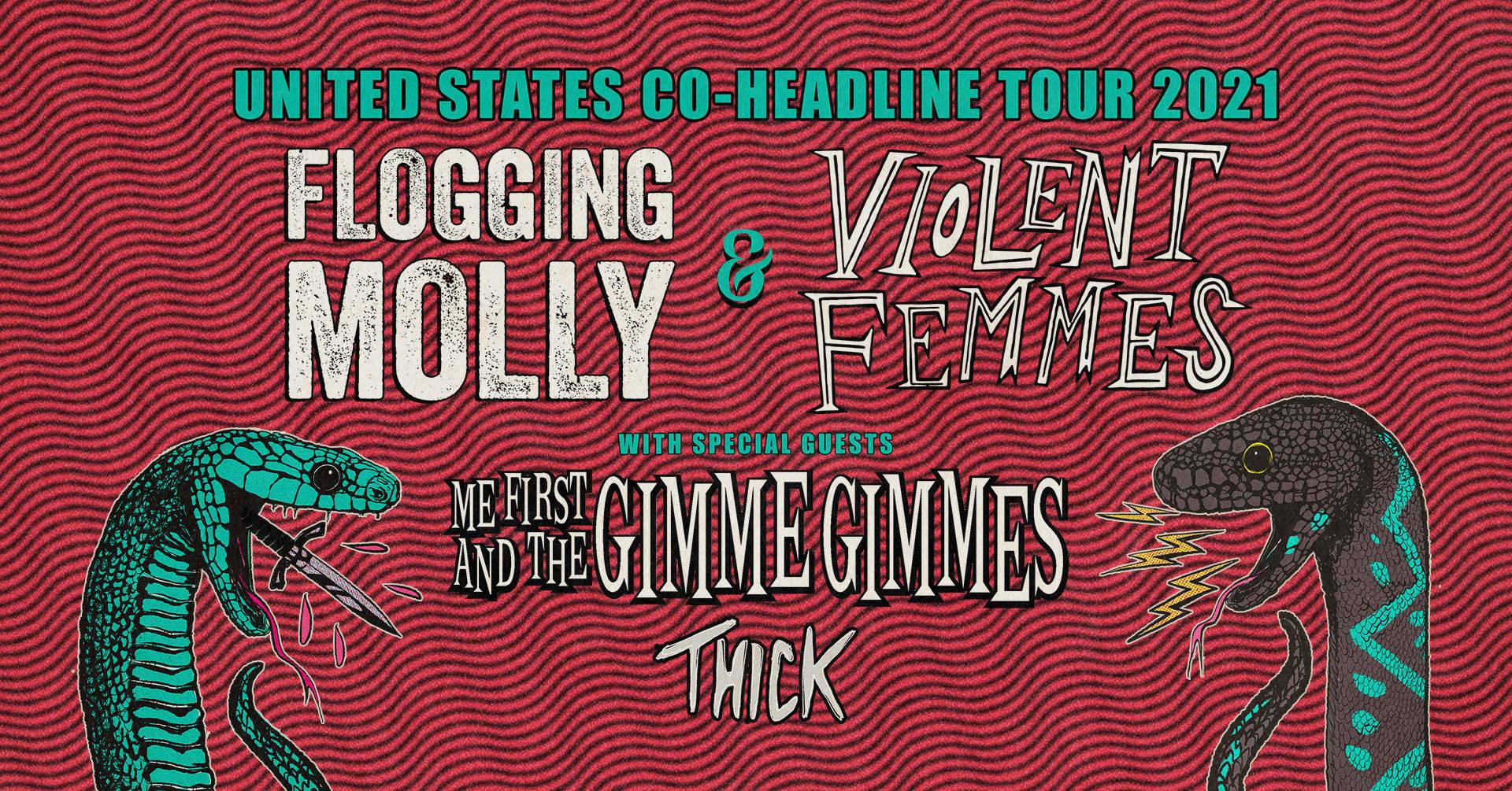 Los Angeles-based seven-piece Flogging Molly are an interesting mix of traditional Irish music and spunky punk rock. Former Fastway acoustic guitarist/frontman and Dublin native Dave King formed the band with fiddle player Bridget Regan, guitarist Dennis Casey, accordion player (and former pro skateboarder) Matt Hensley, bassist Nathen Maxwell, drummer George Schwindt, and mandolinist Bob Schmidt. Getting their start playing regularly at the L.A. bar Molly Malones, Flogging Molly eventually took their music to the road; their explosive and passionate live show was the heart of the band, after all, and they toured relentlessly around the world throughout their career. Their rowdy folk-rock punk revival sound has been compared to the likes of other Irish bands such as the Pogues and Black 47, but the raucous septet opted for its own unique brashness that defied genre lines.

Flogging Molly released their debut, Swagger, in March 2000 on Side One Dummy and followed up two years later with Drunken Lullabies. Crafting exuberant anthems to raise up a full Guinness to, King often used personal touchstones — such as his childhood in a war-torn Ireland, his father’s premature death, and an eight-year exile in the United States — for the band’s compelling lyrical content. Within a Mile of Home appeared in September 2004, and the band continued to hit the road hard in support. The DVD documentary Whiskey on a Sunday was issued in July 2006; it was a candid look at Flogging Molly as both a band and seven individuals, and came with a ten-song CD of acoustic and live tracks. In early 2007, as the group geared up for a U.S. headlining run, Hensley amicably departed to spend more time with his family.

In March 2007, Flogging Molly released the Complete Control Sessions EP. Their fourth studio album, Float, followed a year later. The band then hit the road, documenting the tour in 2010 with the release of Live at the Greek Theatre. Eventually they settled back into the studio with producer Ryan Hewitt, and the following year released their fifth album, Speed of Darkness. Prior to the recording, original drummer Schwindt was replaced by Mike Alonso, who had formerly played with King in the hard rock band Katmandu. Flogging Molly continued to tour over the next several years, and began curating their annual Salty Dog Cruise, which set sail each year over St. Patrick’s Day. They eventually returned to the studio, heading to Dublin to record their sixth album, Life Is Good, which was released in early 2017. ~ MacKenzie Wilson, Rovi 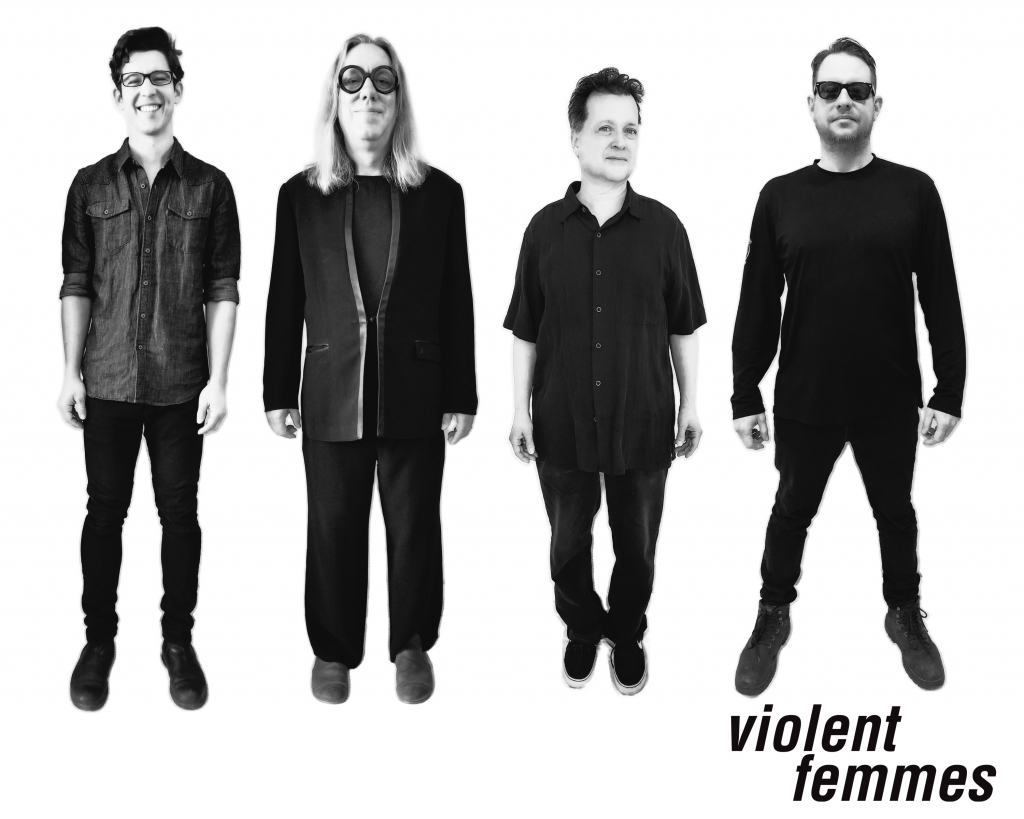 The textbook American cult band of the 1980s, the Violent Femmes captured the essence of teen angst with remarkable precision; raw and jittery, the trio’s music found little commercial success but nonetheless emerged as the soundtrack for the lives of troubled adolescents the world over. Their self-titled 1983 debut was a blueprint for legions of sardonic alternative rockers that would follow, and they continued their blend of searing, darkly humorous lyrics and sharp-edged folk-rock on other standout albums like 1991’s Why Do Birds Sing?

The Violent Femmes formed in Milwaukee, Wisconsin, in the early ’80s, made up of singer/guitarist Gordon Gano, bassist Brian Ritchie, and percussionist Victor DeLorenzo. After being discovered by the Pretenders‘ James Honeyman-Scott while they were busking on the street, the band signed to Slash and issued their self-titled debut, a melodic folk-punk collection which struck an obvious chord with young listeners who felt a strong connection to bitter, frustrated songs like “Blister in the Sun,” “Kiss Off,” and “Add It Up.” Though never a chart hit, the album remained a rite of passage for succeeding generations of teen outsiders, and after close to a decade in release, it finally achieved platinum status.

With 1984’s Hallowed Ground, Gano‘s lyrics began to reflect his devout Baptist upbringing, while the Femmes’ music approached more traditional folk and country structures. Produced by Talking Heads‘ Jerry Harrison, 1986’s The Blind Leading the Naked advanced toward a more mainstream sound; a cover of the T. Rex chestnut “Children of the Revolution” even became a minor hit. After the record’s release, the Femmes temporarily disbanded: Gano recorded a self-titled 1987 album with his gospel side project the Mercy Seat, while Ritchie issued a series of solo LPs including 1987’s The Blend and 1989’s Sonic Temple & Court of Babylon for SST. (I See a Noise appeared on Dali Records in 1990.) In 1989, the group resurfaced with 3, followed by 1991’s Why Do Birds Sing?, which featured the Femmes’ deconstructionist cover of Culture Club‘s “Do You Really Want to Hurt Me?”

Following the release of the 1993 compilation Add It Up (1981-1993), DeLorenzo exited the Violent Femmes to resume the solo career he began two years prior with the release of Peter Corey Sent Me; his sophomore effort, Pancake Day, appeared in 1996. Former Oil Tasters and BoDeans drummer Guy Hoffman was tapped as DeLorenzo’s replacement in time to record 1994’s New Times for Elektra Records, which proved their sole release for the label. Rock!!!!! was released in 1995 on Mushroom Records only in Australia; the live Viva Wisconsin followed on the American indie label Beyond in 1999, trailed early the next year by a new studio effort, Freak Magnet. In the spring of 2001, the Femmes released their first MP3-only album, Something’s Wrong, through the website EMusic.com; it collected an assortment of rarities, including covers, acoustic live tracks, alternate versions, demos, and the like. In 2002, Rhino/Slash reissued their debut as a two-disc deluxe edition that featured 22 previously unreleased tracks, followed by Permanent Record: The Very Best Of in 2005.

The Violent Femmes closed out 2005 with a New Year’s Eve show featuring all three original members and Guy Hoffman. This union was punctured in 2007 when Ritchie filed a lawsuit against Gano, seeking proper accounting of royalties while also claiming he was denied credit for songwriting; additionally, he stated Gano licensed “Blister in the Sun” for use in a Wendy’s commercial without permission. During the lawsuit, the Violent Femmes managed to release a single — a cover of Gnarls Barkley‘s “Crazy,” appearing in June of 2008 — but the tensions caused the group to split in 2009. Ritchie and Gano settled out of court in 2012 and the Violent Femmes reunited in 2013, playing a number of shows, including a slot at that year’s Coachella festival, in celebration of the 30th anniversary of their landmark debut. Following these shows, drummer Victor DeLorenzo departed acrimoniously — in a statement, he claimed “In regards to my history with the Violent Femmes, the dream never quite got there” — and was swiftly replaced by Brian Viglione, a drummer with the Dresden Dolls. Over the next couple of years, this lineup played frequently and released a four-song EP for Record Store Day in 2015, a teaser for the full-length We Can Do Anything in 2016. By the time that album appeared in March 2016, Viglione had resigned from the band. John Sparrow signed on as the Femmes’ drummer in time for the tour supporting We Can Do Anything; recordings from the tour were compiled into a 2017 live album, 2 Mics & the Truth. In 2019 the band returned with their tenth studio album Hotel Last Resort. The album’s punchy sound and direct songwriting was reminiscent of their earliest work, but they expanded their palette to include multi-instrumentalist Blaise Garza as well as opening up a few songs for guest spots by both skateboarding celebrity Stefan Janoski and guitar legend Tom Verlaine. ~ Jason Ankeny, Rovi