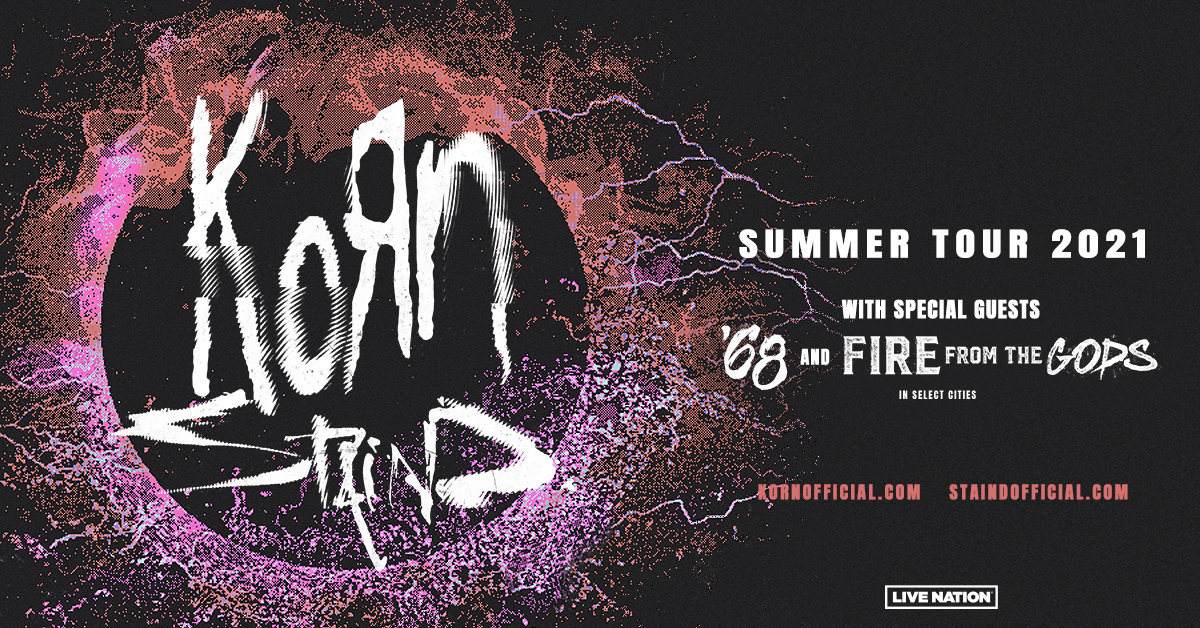 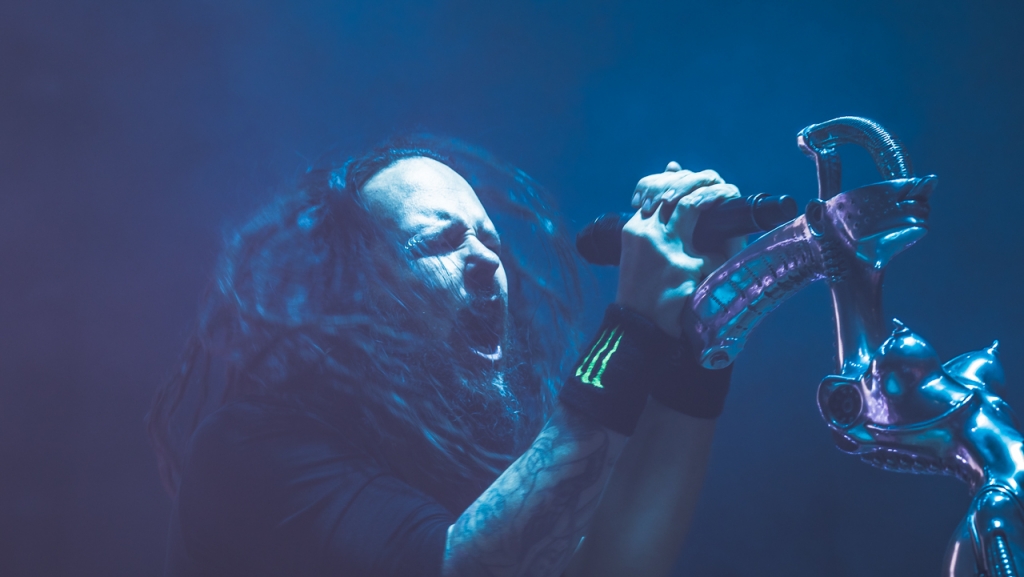 Grammy® Award-winning, multi-platinum band Korn have announced an epic U.S  summer tour featuring very special guests Staind on all dates. The tour will see both bands traversing the country this summer and will give fans the chance to see two of the biggest forces in rock perform on the same stage each night, including a stop at Ak-Chin Pavilion, September 13, 2021 at 6:30 p.m.

Produced by Live Nation, the coast-to-coast 28-city outing will kick off August 5 in West Palm Beach, FL and make stops in Long Island, Detroit, Irvine, Phoenix, Austin and more, before wrapping up with a performance at Dallas’ Dos Equis Pavilion on September 21. Furthermore, both bands will perform at Louisville, Kentucky’s Louder Than Life Festival on September 23.

A stunning paean to loss and darkness, Korn’s 2019 album The Nothing proved to be another historic release for the band.  It marked their 14th Top 10 entry on the Billboard 200 and lifted them into rarified air giving them the fifth-most Top 10 debuts of any rock band in the history of the chart. Led by singles “You’ll Never Find Me,” “Can You Hear Me,” and “Cold,” Noisey declared The Nothing “continues Korn’s mission of probing the hidden corners and harsh realities of life within a shroud discordant darkness.”  Revolver crowned The Nothing “Korn’s best album in over 10 years,” while Metal Hammer affirmed the album “recaptures the genuine darkness of their earlier works” in a glowing 4.5-out-of-5 star review. The Fader added, “Korn have never shied away from innovation… the icons have always looked forward,” and Los Angeles Times applauded the “…deep and potent performances from the band, evoking their ever-present rage but also feelings of loss and isolation.” NME affirmed, “This urgent and important record will ensure the veterans don’t get lost in the shuffle.” Once again, Korn redefine, revitalize, and reimagine the scope of rock music as perennial outliers and enduring iconoclasts.

Formed in 1995, Staind has released seven studio albums and eight Top 10 singles, selling over 15 million records worldwide. The album Break The Cycle, released in 2001 and RIAA certified 5x platinum, featured the smash single “It’s Been Awhile,” one of the most played songs in modern rock history, spending 20 weeks at #1. In 2019 after a five-year hiatus, Staind reunited for some unforgettable festival performances, and a hometown reunion show at Foxwoods Casino in Mashantucket, CT where their new album, Live: It’s Been Awhile was recorded. 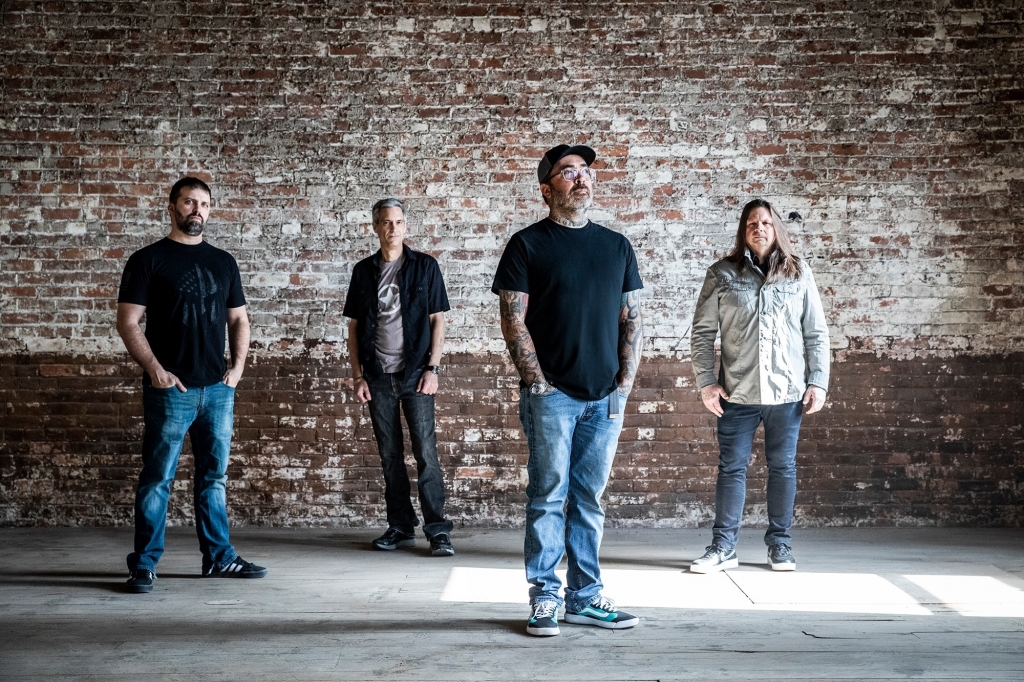 It has been said that first impressions last a lifetime. Luckily for Staind, some only last for about 45 minutes. After a volatile disagreement with Limp Bizkit‘s Fred Durst over some of Staind‘s early cover art, it seemed their big break had walked out the door. Fortunately, by the time Durst had witnessed Staind‘s intense live show, he was ready to exchange phone numbers.

Staind‘s story began in the New England area when vocalist Aaron Lewis and guitarist Mike Mushok met at a Christmas party in 1993. Mushok was able to bring drummer Jon Wysocki into the fold, and Lewis‘ connection with a bass player (who later left) completed the early lineup. Establishing themselves took time, and extensive touring of the Northeast with other established metal acts helped them sell over 2,000 copies of their self-released debut in just over a year. They were primed for their big break, and on October 23, 1997, the hard work paid off.

At a show in Hartford, Connecticut, Staind were all set to open for Limp Bizkit when Bizkit singer Durst raised a stink over cover art on Staind‘s self-released CD. After a heated conversation over whether or not Staind were Satan worshipers, Durst forcefully returned the disc to the band, and walked away. But 45 minutes later Durst was back, not to further the argument, but to make sure he kept in contact with Staind. Blown away by their live show, Durst exchanged phone numbers, and loved their demo tape when they gave it to him. He convinced them to travel to Jacksonville, Florida, to work on the new songs.

After reworking the new material and a successful live show, Durst contacted the head of Flip Records and arranged a meeting for Staind with the label. While in Los Angeles, a three-song sampler was recorded, and by the time February rolled around in 1998, the band had a record deal. After playing the Vans Warped Tour, they began work on their first album, Dysfunction. The album was produced by Terry Date (Deftones, Pantera, Soundgarden) and was released April 13, 1999. A tour with Kid Rock followed that spring and later the band reunited with good friends Limp Bizkit for a summer tour.

Their follow-up, Break the Cycle, enjoyed a prolonged visit at the number one spot on U.S. charts in 2001. Smash hits like “It’s Been a While,” “Fade,” “For You,” and “Epiphany” catapulted Staind into the mainstream, leaving their 2002 DVD MTV Unplugged to go gold. Staind released 14 Shades of Grey in spring 2003, and after a two-year break returned with the chart-topping Chapter V, named to include their self-released debut in the Staind canon. A Singles and Videos compilation arrived in 2006, followed by the all-new studio album Illusion of Progress in 2008, the latter of which debuted at number three on the U.S. Billboard 200 chart. The band’s eponymous seventh studio album, which saw the departure of longtime drummer Jon Wysocki, arrived on September 13, 2011. Later that year, the band recruited drummer Sal Giancarelli and hit the road, documenting the tour with 2012’s Live from Mohegan Sun, which captured the tour’s first show.