“Mike and I have been friends for years but had never explored writing music together. He randomly sent over a demo of something he and Jukka had written for fun and it was right in the vein of music that I had been working on in my spare time,” explained Sotelo. “I suggested that we turn this into an actual band and it all just fell effortlessly into place. Mike and Jukka are tons of fun to worth with and that definitely comes across in the music.”

On paper, Nik Mystery is a band of misfits with a sound that no member has publicly explored, but have passionately wanted to create. The 1975 style guitar riffs meet Phil Collins inspired drum loops and the occasional ‘Van Halen plays Michael Jackson’ solo. A big sound from the suburbs of an infamous city, but not another nostalgia act. The themes are recent, personal and accessible. 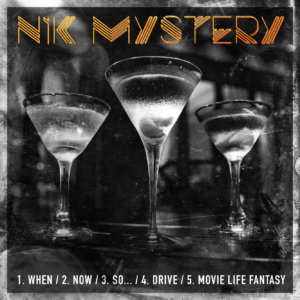 A full-length album is forthcoming.

Dark Below is a hard-hitting heavy rock band that