JINJER & POD at The Van Buren

A versatile, progressive groove metal unit based out of Ukraine, Jinjer have found success both in their Eastern European homeland and abroad with their punitive blend of post-hardcore and death/progressive/nu-metal. Drawing from a wide array of influences, including R&B, soul, hip-hop, and the full spectrum of heavy metal, the band formed in 2009 and features a lineup consisting of Tatiana Shmailyuk (vocals), Roman Ibramkhalilov (guitar), Eugene Abdiukhanov (bass), and Vladislav Ulasevich (drums). Jinjer issued a pair of EPs, 2009’s OIMACTTA and 2012’s Inhale, Do Not Breathe, before breaking big at home with the release of a full-length version of the latter album in 2013. The group’s sophomore long-player, 2014’s Cloud Factory, caught the attention of heavy metal institution Napalm, which signed Jinjer and released their third full-length effort, King of Everything, in 2016. The group toured heavily in support of the LP, hitting the European festival circuit and making their presence known overseas as well. In early 2019, the band returned with the Micro EP, again on Napalm. By the end of the year, its natural counterpoint, Macro, arrived. ~ James Christopher Monger, Rovi 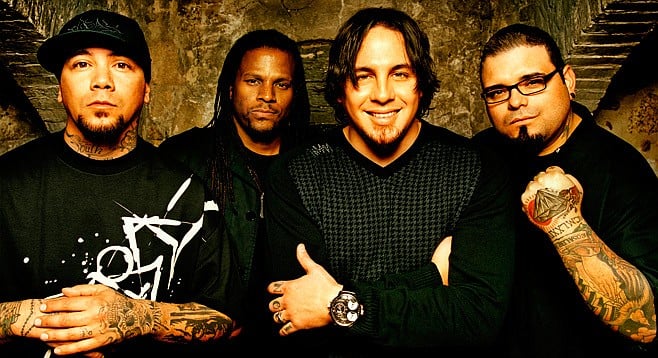 Since 1992, P.O.D. have globally rallied audiences around a hypnotic hybrid of hard rock, hip-hop, reggae, and alternative punctuated by a message of unification and a powerful pledge to persevere. Sonny Sandoval [vocals], Marcos Curiel [guitar], Traa Daniels [bass], and Wuv Bernardo [drums]—rose up from a tough neighborhood just four exists north of the Mexican border into a three-time GRAMMY® Award-nominated multiplatinum mainstay. Moving 10 million-plus records, selling out gigs on multiple continents, logging four Top 10 debuts on the Billboard Top 200, and collaborating with everyone from Rock and Roll Hall of Fame® inductee Carlos Santana to Katy Perry, the group continue to bring people together everywhere.

After countless sweaty basement shows coast-to-coast, the grind continued on 1999’s platinum The Fundamental Elements of Southtown. It set the stage for Satellite in 2001. Not only did Satellite bow at #6 on the Billboard Top 200 and go triple-platinum, but it also yielded four signature singles “Alive,” “Youth of the Nation,” “Boom,” and “Satellite” and the band garnered three GRAMMY® nods. Three top 10 albums followed with the gold Payable on Death, Testify, and When Angels & Serpents Dance. 2012’s Murdered Love logged a Top 20 debut. After 2015’s conceptual The Awakening, Circles earmarked a new chapter in 2018. Billboard claimed, “P.O.D. takes a leap forward with ‘Circles’,” as “Listening For The Silence” and “Always Southern California” lit up DSPs.