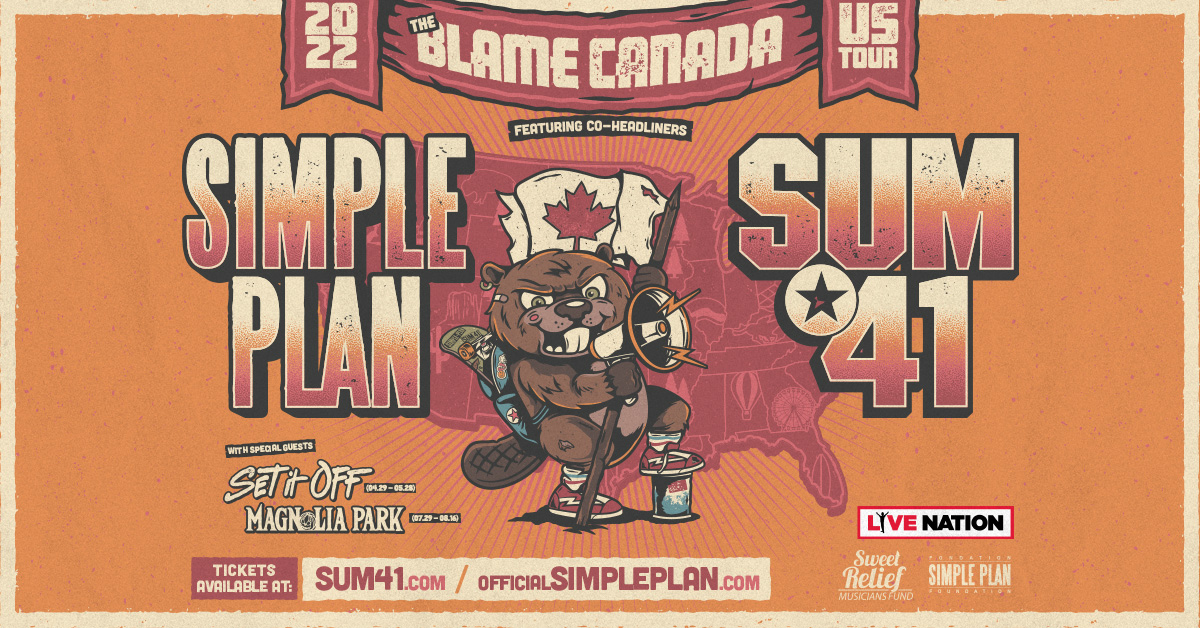 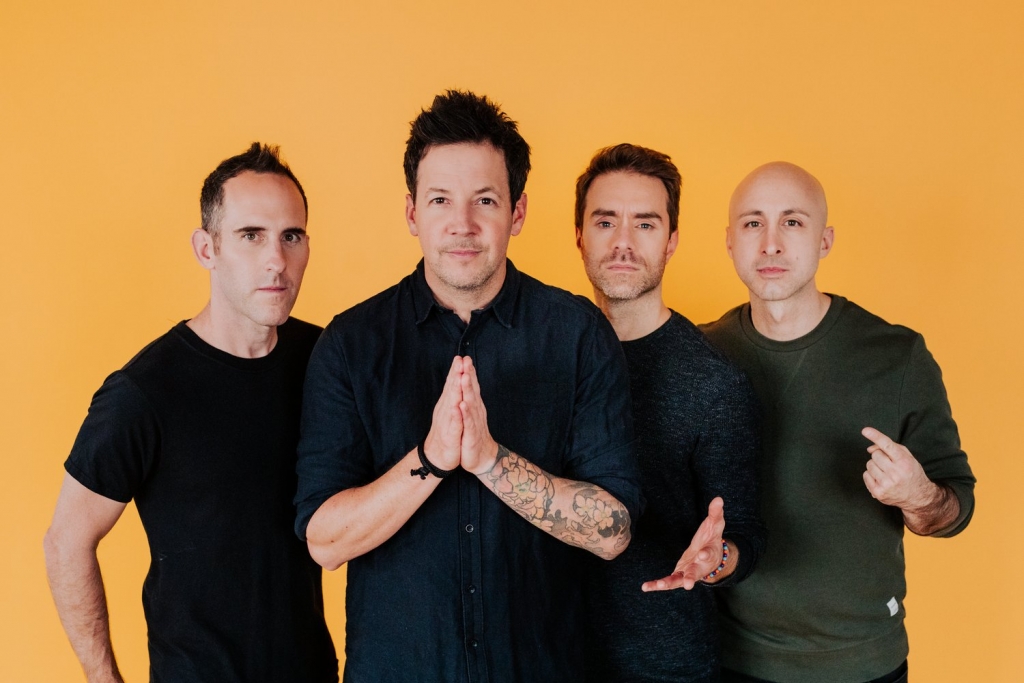 From their new millennium rise to MTV superstardom through pop-punk’s modern resurgence, SIMPLE PLAN have been an indelible part of pop culture since forming in Montreal in 1999. They’ve sold 10 million albums worldwide, won multiple Juno Awards, performed at the 2010 Winter Olympics – and, most recently, launched the omnipresent #ImJustAKid TikTok challenge that’s spawned more than 3.4 million videos, including clips from Hilary Duff, Ed Sheeran, Usher and Venus and Serena Williams.

HARDER THAN IT LOOKS is the first self-released album from dummer Chuck Comeau, vocalist Pierre Bouvier and guitarists Sébastien Lefebvre and Jeff Stinco. The album respects Simple Plan’s storied career while pushing forward in new ways, with songs like “The Antidote,” “Ruin My Life” (ft. Deryck Whibley), “Congratulations,” “Wake Me Up (When This Nightmare’s Over)” and “Iconic” set to stand as fan favourites for years to come.

“It’s amazingly complex to be in a band for 20-plus years, to keep going, stay relevant and manage all the challenges that come your way,” Bouvier says. “It’s the furthest thing from a ‘simple plan’ – it’s truly a lot harder than it looks. Throughout our career, it’s taken a while to be mature enough to understand that our sound is an asset, not a liability. On this album we said: ‘Let’s just embrace who we are and not be afraid to do what we do best.’ Making a good Simple Plan record is just as hard as making something off the beaten path. 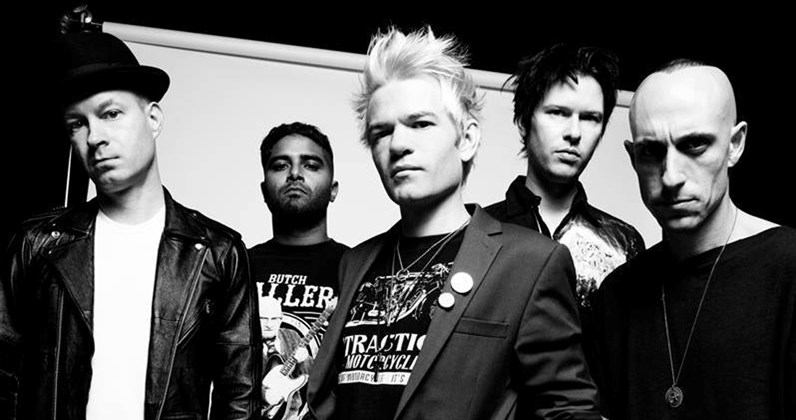 Canadian rock outfit Sum 41 hit the worldwide radar in 1996 after their hometown of Ajax, Ontario, proved unable to fully contain the foursome’s mixture of arena-sized riffing, hip-hop poses, and toilet-bowl humor. Their breakthrough major-label debut, 2001’s All Killer No Filler, featured the chart-topping MTV hit “Fat Lip” and follow-up “In Too Deep.” From there, the band’s mischievous pop-punk style was steadily hardened with darker, world-weary lyrics and a heavier, metal-inspired attack. 2002’s Does This Look Infected? veered in that hardcore direction and still managed to maintain their popularity with singles “The Hell Song” and “Still Waiting.” By the time double-platinum third effort Chuck landed in 2004, Sum 41’s metallic tendencies were at the fore on songs such as “We’re All to Blame.” Despite achieving a chart peak with 2007’s Underclass Hero, the band soon found themselves in decline in the mainstream during the 2010s, due in part to lineup changes and creeping health problems. While Screaming Bloody Murder produced the Grammy-nominated single “Blood in My Eyes,” the album was the band’s lowest-charting effort since their debut. Soon after, frontman Deryck Whibley announced serious health issues that would sideline the band until 2016, when they issued the successful comeback record 13 Voices.

In addition to vocalist/guitarist Whibley, the band also originally included guitarist/vocalist Dave Baksh, bassist Cone McCaslin, and drummer Steve Jocz. Wooed by the boys’ goofy antics and incendiary live show (and excited about the prospect of promoting their very own blink-182), Island put Sum 41 on the payroll in 1999. The Half Hour of Power EP followed, and Warped Tour dates put the word out. They returned in 2000 with the fun-filled full-length All Killer No Filler, and the singles “In Too Deep” and “Fat Lip” became staples of both modern rock radio and Total Request Live. An extensive tour followed, and Sum 41 enjoyed their success the way all near-teenage boys would, with plenty of towel-snapping, groupie-loving, and self-deprecating low-ball humor. In 2002, they returned to wax with Does This Look Infected? While the album was a bit harder-edged, it found the band as excited as ever to mix punk-pop business with sophomoric pleasure: The video for “Hell Song” featured the guys acting out a sort of rock-star debauchery cage match with the aid of a few celebrity action figures. Metallica, Jesus Christ, and the Osbournes all made appearances in the hilarious clip.

It was not all fun and games, however, as Sum 41’s involvement in the charity group War Child Canada had them lending a hand in the making of a 2004 documentary covering the effects of war in the Democratic Republic of the Congo. Five days into filming, fighting and gunfire suddenly erupted around them, and they barely escaped unharmed — these events led to 2004’s slightly more mature and serious effort, Chuck, named for the UN aid worker, Chuck Pelletier, who was instrumental in getting them to safety. The DVD Rocked: Sum 41 in Congo was released at the end of 2005, and the live album Go Chuck Yourself appeared the following March.

Guitarist Dave Baksh left the band during the spring of 2006 due to creative differences, going on to form the metal-punk outfit Brown Brigade. Sum 41 continued as a trio, and their first album as such, Underclass Hero, appeared in July 2007. They eventually returned to being a quartet, replacing Baksh with guitarist Tom Thacker, and began to work on a new album. Screaming Bloody Murder appeared in March 2011. “Blood in My Eyes,” a single from the album, was nominated for a Grammy that year. However, due to a series of back injuries for Whibley (and other issues that would soon come to light), Sum 41 would not return with new material for half a decade, despite their critical success.

During the break, Jocz left the band and was replaced by Street Drum Corps‘ Frank Zummo. Baksh also returned to the fold just in time for Sum 41’s comeback in 2016. The group signed with Hopeless Records and embarked on an international tour that included stops in China and a stint on that summer’s Warped Tour. Their sixth LP, 13 Voices, featured the lead single “Fake My Own Death” and became their third highest-charting release in their native Canada, peaking just outside the Top 20 in the U.S. During promotion for the album, Whibley revealed that he had been in an alcohol-related induced coma during the band’s hiatus in 2014. While recovery included learning to walk and play guitar again, Whibley contributed a large part of his healing to the writing process of 13 Voices. To coincide with the album’s release, the band embarked on an international tour dubbed “Don’t Call It a Sum-Back.”

After setting out on another trek to celebrate the 15th anniversary of their breakthrough, they returned to the studio. Their seventh set, Order in Decline, arrived in the summer of 2019. Intensely political and pulling no punches with their message, the album included the tracks “Out for Blood,” “45 (A Matter of Time),” and “The New Sensation,” borrowing from Linkin Park, Bad Religion, and even Muse on a series of rallying cries aimed at waking up a society on the brink of moral collapse. ~ Johnny Loftus & Neil Z. Yeung, Rovi